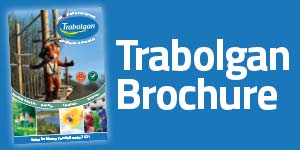 The Early History of Trabolgan

The history of Trabolgan takes us back to the 12th Century when the French Benedictines had a monastery which was a repository for valuable manuscripts, paintings and sacred objects saved from religious prosecution sweeping continental Europe.
However, the land was confiscated by the crown and the Fitzgerald Family took up residence in the year 1174 A.D.
Before this it is possible that Trabolgan was a 'holiday centre' for the Ancient Irish and the remains of a Ring Fort are to be found on the western side of the Estate (beside the 14th tee).
Around 1640-1650 AD, the Roche family purchased the Fitzgerald estate (approx 1500 acres) from Edmund Fitzgerald of Ballymaloe and lived for many centuries at Trabolgan. Indeed, the well known Roches Point at the mouth of Cork Harbour is named after this family. The Roche family crest can still be seen adorning the wall of one of the terraced homes leading up to the lighthouse. The estate during these years had a slate quarry and flax factory on site. The slate was poor quality and used only on the estate but the flax was exported to England. West of the estate's house was a smuggler's cave, used for smuggling tobacco, but this has since collapsed.

In 1850, Edmund Burke Roche, was created 1st Baron Fermoy in the Peerage of Ireland in 1850 - he was the great grand father of HRH Princess Diana. Local legend has it that Lord Fermoy lost Trabolgan on a bet with a guest who had a good greyhound. Lord Fermoy thought he had a better one, and arranged a race with Trabolgan as the prize. Lord Fermoy's dog is reputed to have spotted a crow which he chased instead of the hare and so lost his Lordship the race and Trabolgan. Whether the story is true is unknown, but in 1912 the Clarke Family (Clarkes Tobacco Co. of Bristol - Players Cigarettes, etc) acquired Trabolgan House and 1500 acres. Mr and Mrs Clarke resided at Trabolgan and even grew tobacco during the war years, until late 1930's when Mr Clarke died and Mrs Clarke moved residence. The Irish Land Commission purchased the total estate from the Clarke family and most of the land - (except some 140 acres) were divided amongst tenant farmers.
The remaining estate including the house was used as a base by a unit of the Irish Army during the Second World War. In 1948, a Mr. Bright and Mr White, together with a number of local investors decided to purchase the remaining estate from the Land Commission and to operate the estate as a holiday camp for Pontins. For this purpose, over 100 chalets, a dance hall and an outdoor swimming pool were built. The holiday centre was successful at the start and attracted British holiday makers, but on the whole it was not successful and so Trabolgan was put up for sale once more. During the following years the mansion and estate changed hands from people such as Egan to Sutton and was used as accommodation for overseas engineers involved in the building of the Whitegate refinery. In 1958 Gaedhealachas Teo decided to buy Trabolgan house and estate and establish a boarding school for boys - Scoil na nOg. This school was opened in June 1959 and until 1973, 160 pupils each year, received their education through Irish. During the summer months, Scoil na nOg operated a summer Irish college where up to 1400 boys and girls were provided with an opportunity to improve their knowledge of the Irish language.
In 1975, the Trabolgan estate was purchased by a Dutch Coal and Metal Industry Pension Fund and a small holiday development consisting of 30 houses, bar and clubhouse was opened in 1980 (catering mainly for the Continental market). The decision to extend the village to include a Main Centre and a wide range of facilities was taken in 1983 and building was completed in 1985. The present Trabolgan was officially opened in June 1985 by Mr. McNulty, Director General of Bord Failte.
In 1990, after changing hands a few times Trabolgan was bought by Scottish & Newcastle plc and has since undergone redevelopment programmes in 1991, 1998, 1999, 2006, and since 2011 has had an annual investment and redevelopment programme which continually focuses on both accommodation and facilities.  In the winter of 2017 a further major addition was added with the covering of the entire main plaza area.

The old Trabolgan house was situated where the swimming pool complex is today. A Georgian house, of two storeys at the front, and three storeys at the back, to which single-storey wings were added on either side, making a facade of exceptional length. The front of the house faced out to sea; so that in a south-easterly gale it was hard to open the hall door. The house was approached by an avenue of more than 1 mile in length, which was closely hemmed in by trees and shrubs for most of the way, emerged spectacularly into the open by the sea and swept around to the long front of the house. Half way up the avenue there is a triumphal arch similar in design to the Arc de Triumphe in Paris. One of the Roche family is supposedly buried under the Arch. Finally, the shape of the bay gave the place it's name. Tra meaning strand/beach and Bolgan/Bulgen meaning bulging or big wave.